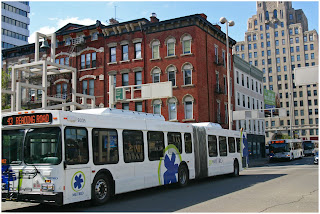 Ridership and public support for transit has continued to grow in Cincinnati, despite consistent attacks from the Kasich administration. Photograph by Randy Simes for UrbanCincy.
POLL: Tax Support for Public Transit Grows, While Funding Sources in SW Ohio Remain Limited — UrbanCincy: "While ridership on transit and support for taxes going towards transit increases throughout Ohio and the United States, the State of Ohio continues to invest in almost exclusively roads. In the recommended 2014-2015 Transportation Budget, Governor John Kasich (R) and ODOT Director Jerry Wray call for a mere 1.9% of the $3.1 billion budget to go towards public transportation."

'via Blog this'
Posted by fpteditors at 4:31 AM