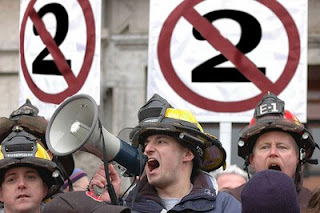 Quinnipiac: Opposition To Ohio's SB 5 Grows; Women, Union Members Push Kasich Deeper In Hole - ProgressOhio: "If the election were held Tuesday instead of in two weeks, a solid majority of Ohioans would vote to reject the state's new law restricting collective bargaining by government workers.

The latest poll from Connecticut's Quinnipiac University released Tuesday showed a 25-point gap between opposition and support for Senate Bill 5, which appears on the Nov. 8 ballot as Issue 2. That's nearly double the 13-point gap seen about a month ago when the poll showed momentum shifting to the side of those trying to save the law."

'via Blog this'
Posted by fpteditors at 8:34 PM